THE PRODUCTIVITY OF RESIN WORK, THE FIRST GROUPING OF OWNERS, RESEARCH INTO RESINATION STIMULANTS AND NEW PROJECTS: THE KEY ELEMENTS FOR THE FUTURE OF THE TRADE

THE PRODUCTIVITY OF RESIN WORK, THE FIRST GROUPING OF OWNERS, RESEARCH INTO RESINATION STIMULANTS AND NEW PROJECTS: THE KEY ELEMENTS FOR THE FUTURE OF THE TRADE

The boost of the Interreg Sudoe SustForest and SustForest Plus projects, which began in 2010; the start-up of the European Resin Territories Network and Strategy and the continuity of the actions of the ResinLab, ACREMA and RESINEX Operational Groups, are the key projects for the resin sector.

The International Conference of the Interreg Sudoe SustForest Plus project, The Resin Tree: the future of a trade, was held in Soria on 4 and 5 October and brought together the main agents involved in the development of the resin resource as a factor for job creation and revitalisation of the economy in the territory. The opening ceremony was attended and supported by Yolanda Santos, Councillor for Tourism of Soria City Council; Benito Serrano, President of the Provincial Council of Soria, and Yolanda de Gregorio, territorial delegate of the Junta de Castilla y León in Soria, together with the manager of the Cesefor Foundation, Pablo Sabín.

During these two days, the following actions and results of the SustForest Plus project were presented:

The Plan for the improvement of the quality of work and the sustainability of the resin trade.

Through this study carried out by the Portuguese partners of the SustForest Plus project, the National Institute of Agricultural and Veterinary Research, INIAV, the Municipality of Penela and the Municipality of Proença-Nova, a study has been carried out to know the socio-labour profile of the European resin workers. Among the observations detected, it was concluded that the resin workers are a diverse group, but it is common to all the countries studied that it is a hard job with little social recognition.

Also, despite the low remuneration of the activity, the main dissatisfaction of this group, it is important for the income of their families. It is therefore concluded that it is essential for the resin workers to increase labour productivity, and to improve organisation, training and innovation in the sector to add value to the resin, taking advantage of the opportunities for decarbonisation of the economy and the bioeconomy.

The contribution of the resin activity to the defence against fires

INIAV presented its results in relation to the positive externalities generated by the resin activity and its adaptation to the policies of the new Common Agricultural Policy (CAP), highlighting the contribution of this activity to the fire defence system, one of the main forestry problems in this country. Within this line, the City Council of Provença Nova presented the integration of the resin tree grower in the municipal fire defence system in its territory. The conclusion reached was that, given the current state of abandonment of the pine forest, the reactivation of resin exploitation will only be possible if it is integrated into preventive forestry actions.

The potential of the multifunctional activity of resin workers

On the other hand, the Municipality of Penela presented a study of case studies developed in Spain, France and Portugal to analyse the possibilities of carrying out a multifunctional activity by resin professionals, concluding that forestry activities, rural tourism or mycological exploitation stand out among those observed.

It is concluded that there is a great potential for multifunctionality in the economic viability of resin production systems, especially in abandoned areas, and it is pointed out that decision-makers are already aware of these issues but lack practical implementation. The role of the European Resin Territories Network (RETR) is fundamental to lobby and establish dialogue with the entities responsible for implementing this way of supporting resin activity.

Research on the use of new resination stimulants in the exploitation system of Spanish pine forests.

In addition, the results of the Polytechnic University of Madrid in the study of new stimulants were presented. The usefulness of micro-resin techniques for testing new formulations, the good profitability of salicylic pulp and the similar productivity of ethrel pulp compared to traditional pulp in 15-day pica periods were highlighted.

Thanks to the joint work with experts in quality seals, a working document has been presented that includes the bases of a quality mark for European natural resins, and whose success will be in the hands of the active participation of the different agents of the value chain of this product.

The study of the carbon footprint of European natural resin products

Finally, the study of the carbon footprint of natural resins versus the counterpart resin obtained from tal oill showed a lower footprint for natural resins (both in Spain and Portugal) and also showed how it could be further reduced by introducing renewable energies in the transformation processes, by carrying out a more local transformation or by resinating naturally regenerated stands.

The promotion of training, legal and fiscal recognition of resin workers and labour associations in Spain and Portugal

The Ministry for Ecological Transition and the Demographic Challenge highlighted the actions of the plan for the socio-economic activation of the forestry sector in the field of natural resins, promoting associations and cooperatives, promoting the training of all agents and working on the legal and fiscal recognition of resin workers. The different operational groups underway and their strategic importance were also presented, as well as the position of our sector within the plan for the recovery, transformation and resilience of the economy, and its situation in the Spanish forestry strategy.

To close the Spanish perspective, the Segovia Forestry Association, ASFOSE, presented the first group of owners for the management of resin harvesting, a unique model to date that is presented as a tool with great potential in areas where forest ownership is in private hands and of small size.

From Portugal, the importance of the two Interreg Sudoe Sustforest and SustForest Plus projects developed since 2010 for the revaluation and revitalisation of the resin sector was highlighted, when introducing and justifying the importance of resin in Portugal, the concrete proposal to include the externalities of the activity in the CAP, betting on resin as one of the sectors of the bioeconomy supported within the National Rural Development Programme of the Ministry of Agriculture, Fisheries and Food until 2025 with about 30 million euros distributed in three pillars focused on the promotion of resin extraction, the strengthening of the industry and the differentiation of natural resins.

From France, the importance of the ecosystem services associated with the resin activity in French forests is highlighted, although the current difficulties are taken into account as it is an almost testimonial activity in our neighbouring country with an important need for innovation to make it profitable in the conditions of this country where the labour costs and the remuneration of the owners are the main problem for its development.

These two initiatives, key to the SustForest Plus project, aim to bring together entities for the coordinated management and defence of resin-producing interests. The RETR aspires to be the reference organisation for the resin sector at European level, linked to all the agents in the value chain and recognised as a legitimate interlocutor.

While awaiting its final configuration, which will be established at the last meeting of the project, to be held in Bordeaux, France, on 9 and 10 November, the RETR is seen as the tool that will provide the backbone of the sector in the medium term and independently of the existence of projects that support it. The European Resin Territories Strategy that has been presented as a result of this product has been the "Reconversion of the European natural resin sector to adapt its production capacities to the opportunities offered by the European bioeconomy and the reinforcement of the leadership of the European resin industry in the supply of natural resin and its derivatives".

During the second day of the event, the first meeting of the RETR was held in which a series of agreements were established to be worked on and confirmed at the next meeting in Bordeaux.

The new Operational Groups already working for the sector: ResinaLab, ACREMA and RESINEX

Three projects were presented that will give continuity to innovation in the resin sector, and which are already operating as Operational Groups. The first, GO Resinlab, is coordinated by the Cesefor Foundation and will last until 2023. ResinLab presents the coordinated action of partners from Castilla La Mancha, Castilla y León and Extremadura with the aim of generating new models for the professionalisation of resin workers, developing new extraction methodologies and developing actions to improve the transparency and traceability of the product.

Secondly, the GO ACREMA was presented, coordinated by the company Sinergias Sostenibles Resiforest, S.L. and involving partners from Galicia, Asturias and Castilla y León, which seeks to improve the productivity of Pinus pinaster and Pinus radiata stands through the integration of an innovative resin exploitation that allows obtaining high added value bio-products as a complement to the production of quality wood while maintaining the sustainability of the stand.

Finally, the GO RESINEX was presented. This regional group aims to transfer knowledge, professionalisation and innovation in the Extremaduran resin sector. It is coordinated by the company Jardinería Técnica Norte Extremeña S.L. and will be active until 2022.

Presentation of the remasa trolley and application of ResinAPP resin traceability.

Finally, to conclude the conference, the test plots in the resin-treated forests of the municipality of Tardelcuende in Soria were visited, where the presentation of the remasa wheelbarrow developed within the SustForest Plus project took place, a simulation of the use of the ResinAPP resin traceability application was carried out in the same forest and the trees where the tests on stimulants have been carried out over the last three years were visited. 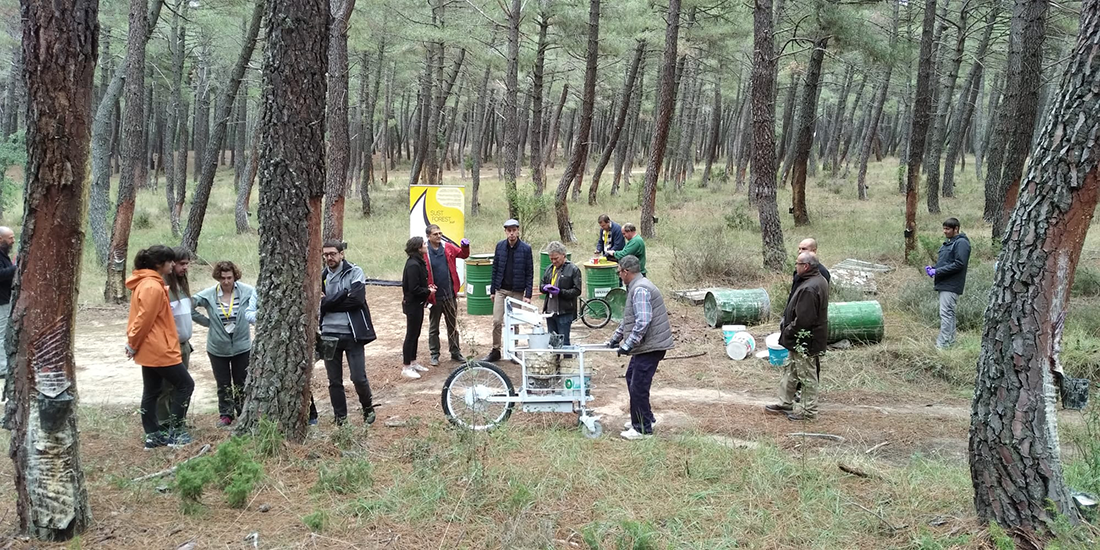 About the SustForest Plus project

The SustForest Plus project SOE2/P5/E0598 "Strategy and collaborative networks for multifunctionality, conservation and employment in the territory of Southern Europe through resin extraction" runs from 2018 to 2021, is co-financed by the Interreg Sudoe Programme through the European Regional Development Fund (ERDF) of the European Union and aims to improve the joint management methods of the natural resin sources of the Sudoe territory as a strategic and preferential resource for the industry, job creation and rational use of natural resources.

Sust Forest Plus is an initiative promoted by the main agents of the natural resin value chain in Spain, France and Portugal to boost the economic activity of the sector with three objectives: